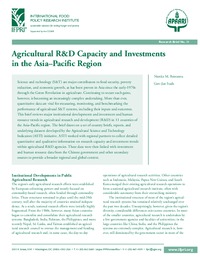 The Asia–Pacific region is highly diverse in its geography, culture, politics, and history, and this diversity extends to its economic and agricultural development, and consequently to its agricultural R&D systems. In 2002, the Asia–Pacific region as a whole, including its four high-income countries, spent $9.6 billion on agricultural R&D (in 2005 international prices), with China, Japan, and India accounting for about 70 percent of this total. Regional investments in agricultural R&D grew considerably during the 1981–2002, especially in the last decade of the period, during which time both China and India intensified their agricultural research  spending. Other smaller countries, such as Malaysia and Vietnam, also realized impressive agricultural R&D spending growth over this timeframe, whereas spending in Pakistan, Indonesia, and Laos, proved sluggish and at times negative, largely due to the Asian financial crisis, the completion of large donor-financed projects, or high rates of inflation.

Although the bulk of Asian agricultural R&D is still financed by national governments, new sources of funding are emerging in some countries. In particular, competitive funding mechanisms, internally generated revenues, and production or export levies have gained prominence. With the exception of Laos and Nepal, donor dependency is low. The private sector has also become more involved both in conducting its own research and in funding public agricultural research. Human and financial resource capacity is also varied: several countries have well-managed and funded systems producing world-class research, while others––some of which are highly dependent
on agriculture––have experienced significant reductions in their R&D spending and research intensity levels. More than ever, a knowledge divide between the region’s rich and poor countries and the scientific “haves” and “have-nots” is becoming visible. Sustainable financial and political support for agricultural R&D is crucial, as is the creation of attractive investment climates for private investors, if the challenges of sustainable economic and social development facing the region are to be met.