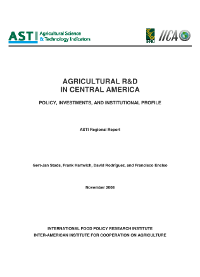 Distribution of spending among countries in the Central American region is very uneven, with Costa Rica and Nicaragua accounting for the lion’s share of the region’s agricultural research expenditures. Total agricultural R&D spending has remained fairly stagnant since the early 1980s.

Growth in spending in Costa Rica and Belize during 1981-2006 was offset by cuts in Guatemala and El Salvador. Funding for agricultural research is still predominantly through government allocations in Panama and El Salvador. Agricultural R&D in Nicaragua, on the other hand, is extremely dependent on foreign donor funding. A number of countries have sought to fund agricultural R&D by a tax on agricultural production or exports while other countries have been successful in commercializing their research results.