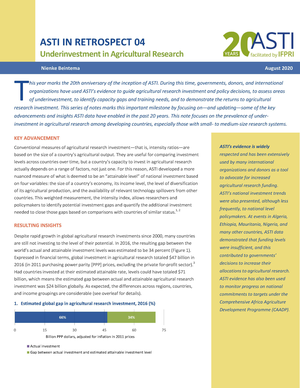 2020 marks the 20th anniversary of the inception of ASTI. To highlight this important milestone, the program released a Series of Notes focusing on—and updating—some of the key advancements and insights ASTI data have enabled in the past 20 years. This note focuses on the prevalence of underinvestment in agricultural research among developing countries, especially those with small- to medium-size research systems.

Conventional measures of agricultural research investment—that is, intensity ratios—are based on the size of a country’s agricultural output. They are useful for comparing investment levels across countries over time, but a country’s capacity to invest in agricultural research actually depends on a range of factors, not just one. For this reason, ASTI developed a more nuanced measure of what is deemed to be an “attainable level” of national investment based on four variables: the size of a country’s economy, its income level, the level of diversification of its agricultural production, and the availability of relevant technology spillovers from other countries. This weighted measurement, the intensity index, allows researchers and policymakers to identify potential investment gaps and quantify the additional investment needed to close those gaps based on comparisons with countries of similar status.