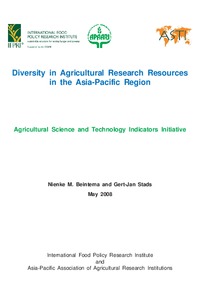 The Asia-Pacific region is highly diverse in terms of geography; population distribution; economic development; and cultural, political, and historic backgrounds. With over 30 distinct countries, the region comprises about 60 percent of the world’s population, including more than half of the world’s poor (IFPRI/ADB 2007).  Asevidenced above, this high level of diversity is also reflected in the region’s agricultural R&D efforts. In 2002, the Asia-Pacific region as a whole, including  highincome countries, spent $9.6 billion on agricultural R&D (in 2005 international prices). Unsurprisingly, distribution of spending among countries was very uneven,
with China, Japan, and India accounting for a combined total of about 70 percent of the region’s spending. Regional investments as a whole grew by 3.0 percent per year during 1981-2002. Most of this growth took place in the last decade, when China and India in particular accelerated their agricultural research spending. Some of the smaller countries such as Malaysia and Vietnam also realized impressive growth in agricultural R&D spending in recent years, whereas growth in countries like
Pakistan, Indonesia, and Laos was more sluggish (and in some cases negative), for a variety of reasons including the Asian financial crisis, the completion of large
donor-financed projects, and mass inflation.

Overall, some of the region’s countries have well-managed and well-funded systems producing world-class research, while others (some of which are highly agriculture-dependent) have experienced significant declines in their R&D spending and research intensity levels. Sustainable financial and political support for agricultural R&D is crucial, as is the creation of attractive investment climates for private investors, if the challenges of sustainable economic and social development facing the region are to be met.