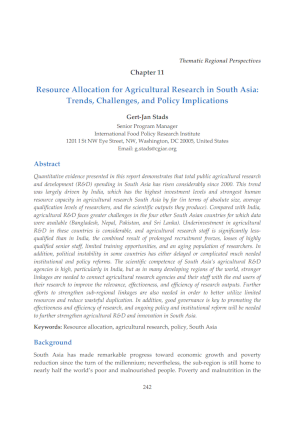 Quantitative evidence presented in this report demonstrates that total public agricultural research and development (R&D) spending in South Asia has risen considerably since 2000. This trend was largely driven by India, which has the highest investment levels and strongest human resource capacity in agricultural research South Asia by far (in terms of absolute size, average qualification levels of researchers, and the scientific outputs they produce). Compared with India, agricultural R&D faces greater challenges in the four other South Asian countries for which data were available (Bangladesh, Nepal, Pakistan, and Sri Lanka). Underinvestment in agricultural R&D in these countries is considerable, and agricultural research staff is significantly less- qualified than in India, the combined result of prolonged recruitment freezes, losses of highly qualified senior staff, limited training opportunities, and an aging population of researchers. In addition, political instability in some countries has either delayed or complicated much needed institutional and policy reforms. The scientific competence of South Asia’s agricultural R&D agencies is high, particularly in India, but as in many developing regions of the world, stronger linkages are needed to connect agricultural research agencies and their staff with the end users of their research to improve the relevance, effectiveness, and efficiency of research outputs. Further efforts to strengthen sub-regional linkages are also needed in order to better utilize limited resources and reduce wasteful duplication. In addition, good governance is key to promoting the effectiveness and efficiency of research, and ongoing policy and institutional reform will be needed to further strengthen agricultural R&D and innovation in South Asia.
Powered by Drupal