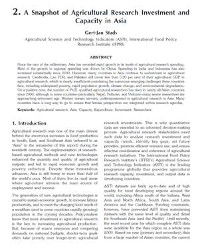 Overall, since the turn of the millennium Asia has recorded rapid growth in its levels of agricultural research spending (excluding the private for-profit sector). Most of the growth in regional spending was driven by just one country: China. In 2013, China invested $9.4 billion purchasing power parity or PPP dollars (in 2011 prices) in agricultural R&D. Spending in India and Indonesia has also increased substantially since the turn of the millennium. These countries rank second and third, spending $3.4 and $1.4 billion PPP dollars in 2014, respectively.

On a positive note, the number of PhD-qualified agricultural researchers has risen in nearly all Asian countries since 2000, although in some countries—particularly Nepal, Pakistan, and Vietnam—many senior researchers are approaching retirement age. Women also remain severely underrepresented in agricultural research in Asia, and many countries have a long way to go to ensure that female perspectives are integrated within research agendas and ultimately into the formulation of agricultural and related policy.