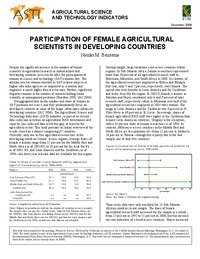 Despite the significant increase in the number of female scientists in agricultural research in industrialized and developing countries in recent decades, the participation of women in science and technology (S&T) remains low. The attrition rate for women enrolled in S&T-related subjects at higher-education agencies or employed as  scientists and engineers is much higher than it is for men. Further, significant disparity remains in the number of women holding senior scientific or management positions (Sheridan 1998; IAC 2006).

Disaggregated data on the number and share of women in S&T positions are scarce, and they predominantly focus on developed countries or some of the larger, often more-advanced, developing countries (IAC 2006). The Agricultural Science and Technology Indicators (ASTI) initiative, as part of its overall data collection activities on agricultural R&D investments and capacity, has collected data to fill this gap; at least for the agricultural sector. This brief provides an initial overview of the results, based on a dataset comprising 67 countries. Currently, only one in five agricultural researchers in the developing world are female. Across regions, average shares of female scientists range from 17 percent for the Middle East and North Africa as of 2001/03, to 20 percent for the Asia-Pacific, as of 2002-/03, and Latin America and the Caribbean, as of 1996—the latest year relevant data are available for this region.